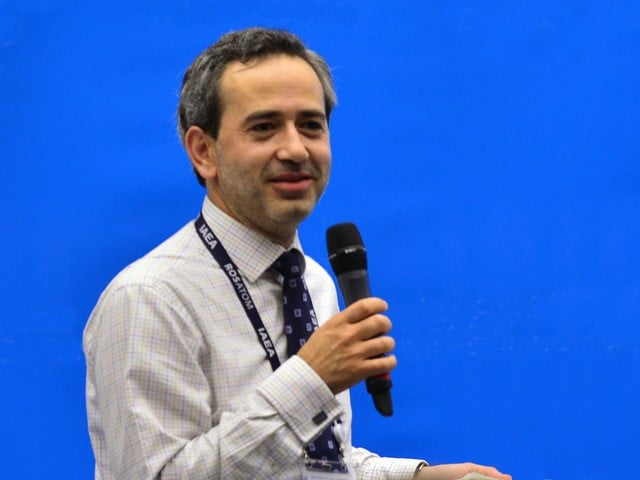 “The personal satisfaction of telling someone a story that the other person did not know,” Ayhan Evrensel explains, “is the kick that keeps me alive.” And while the topics and audiences have changed over his 25 year career, his basic approach to any subject matter remains the same.

“I want to relay to the people what they don’t know. I think: ‘They are not here; I am here. I have studied the issue and spoken to ordinary people and to key people, and this is my summary.’” This was the empathetic and quietly confident approach that helped him meet deadlines for live reports on the most serious European and world affairs for Turkish news channel NTV and other European media outlets. In these 60 second opportunities to get his summary across to potentially millions of people at home, Ayhan would “try to put things in a way my brother or mother would understand.”

This mode of journalism was the ultimate expression of his storytelling, which began for Ayhan with a dream to explain to the world the realities of his home country as part of the diplomatic service. But that wasn’t the best way to realise the dream. “At some point in my studies I realised I didn’t have to confine myself to one structure.” What followed was a jump into journalism, after the raw storytelling of a tour guide, personifying the history and culture of Turkey for people from around the world.

Eventually the business of asking questions as a journalist made way for answering them as a press officer and communicator for international organisations in Vienna, Austria – first the Organization for Security and Co-operation in Europe (OSCE), then the International Atomic Energy Agency (IAEA). It was at the latter that Ayhan’s footloose communications career grew roots in the subject matter of nuclear energy. “It was relatively new to me when I jumped into nuclear. I didn’t know much of the technicality. But really, once I started I was taken by the complexity of issues.”

Thanks to his flirtation with diplomacy and a background in political science, Ayhan says he found it “relatively easy” to understand the political aspects of nuclear energy. “But I did not know the other side – the technical superiority that nuclear energy offers. The more you dive deeper into nuclear the more you think, ‘If I didn’t know this there must be millions out there who don’t know it – why don’t we tell this story?’” After several years he moved on to work as spokesperson for FANR, the newly created nuclear regulator in the UAE, helping it to establish and demonstrate an open and transparent culture, before returning to IAEA and supporting the evolution and modernization of its broad spectrum of communication activities specifically on nuclear power and research reactors, for another few years.

Now, perhaps more than ever, it is urgent to tell insightful stories of nuclear energy and the role it can play, which is Ayhan’s aim for the coming stage of his career as an independent communication consultant. “What unites audiences across cultures, what everyone can understand,” says Ayhan, “is that there is never a one-shot solution,” either in energy or otherwise. “If someone says nuclear power is the only way – disregard that person. If somebody else says nuclear has no value – disregard that person as well. Every single thing has an advantage and a disadvantage. The important thing is to weigh these things out and to make a conscientious choice.”

“Everybody is in this together,” he concludes, “I want to help people in bringing the idea that nuclear is one of the key solutions to the crisis that we have – and it is a crisis. For my kids the crisis will be worse, for their kids it will be disastrous if we don’t act now.”