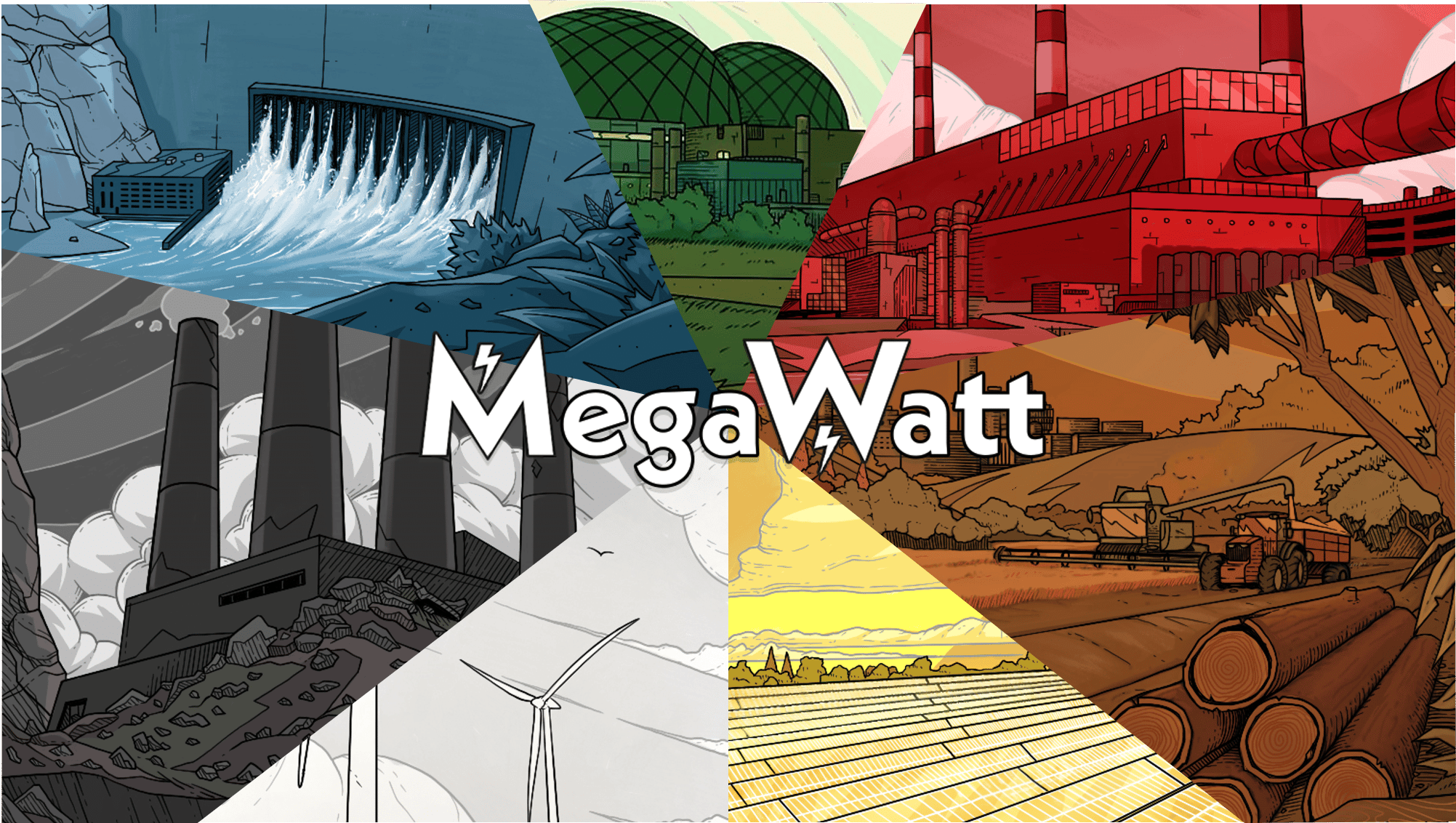 Everyone has their own idea of what the future energy system should be, but whose plan is really the best? Instead of using academic papers and protracted debates on social media you can now settle the matter with MegaWatt, a new card game that lets 3-5 players build their grid and stress test it as the climate changes around them.

The game begins with a build phase where players deploy various power sources to create the biggest and best power systems they can afford. Their work is put to the test in the next phase as climate cards change the game round by round. A good range of technologies are included: wind, solar, biomass, hydro, coal, gas as well as nuclear. Each has the chance to make a game-changing contribution as the game is shaped by sea level rise, carbon taxes, political upheaval and more.

Learning the weaknesses and relative advantages of their power sources as they are exposed, players scramble to mitigate the damage and clean up their grid before the end of the game. Just like the energy system and the climate, nobody knows what is coming next. Will they be saved by new technologies or undermined by the weather in the next turn of cards? A chance to see an advanced Weather Forecast could prompt a change in your tactics, while a Public Consultation could halt your rival’s expansion plans. In the end, the winner will be the one benefitting from the largest grid, but only once its environmental cost is taken into account.

Learning is what this game is all about. As much as it is fun for anyone to play, the game is designed to support schools in exploring the challenges of energy and climate change, by bringing them to life in science and geography lessons. It is useful in several other school contexts as well, and will develop into an overall package that meets the Gatsby benchmarks for career guidance.

MegaWatt is the first product by Curieus Games, which was started by eight diverse members of the UK’s nuclear graduates scheme. Their plan is to get the game into schools with the help of sponsors. A pilot program for this is currently being run in Lancashire with sponsorship from Westinghouse for 300 decks of cards – enough for 30 classes. Training for up to 20 teachers is being run in November and after that the game can be used in schools across Preston and Blackpool. Next will be a training programme in Cumbria, thanks to support from National Nuclear Laboratory and Energus. The Curieus Games team is looking for more sponsors for regional or national support, and does not limit itself to nuclear sector – the game raises understanding of energy issues in a neutral way.

In contrast with its ubiquity in modern life, we give hardly any thought to electricity and still less to the distant machines that generate it. And there is an extra complication with nuclear power plants, because raising them as a subject and pushing positive messages can trigger a distrustful response. The design of MegaWatt neatly manages both these communication problems by placing the entire energy system in context, and nuclear within it. The result is a brief education about energy that comes in a bite-sized session which leaves you wanting another chance. It only takes about 30 minutes to play, although you will probably want to try a few more times because in MegaWatt you can practice something we have to get right first time in the real world.

MegaWatt is for 3-5 Players aged 11+ and is available from www.curieus.games. All profits from the game’s first financial year will go to Eden Reforestation Projects to fund the planting of more than 50,000 trees. As a long term commitment, each pack sold will support the charity to plant 10 trees.