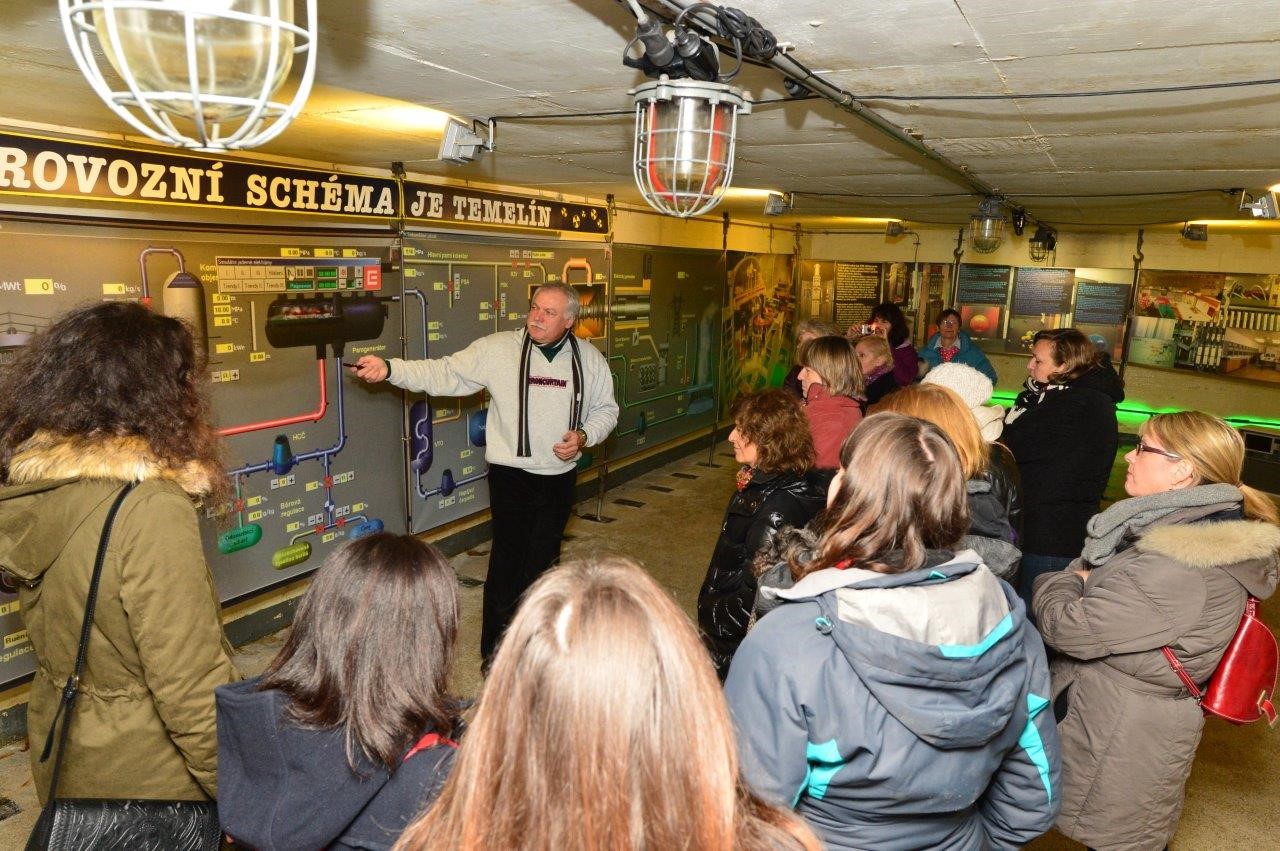 This is the story of how Women in Nuclear (WiN) IAEA embarked on a fascinating time travel adventure visiting a sombre relic of the post-World War II arms race.

It was one of those lucky coincidences. As a member of the WiN IAEA Executive Committee, I am always on the lookout for speakers, locations and events of potential interest to us. So, when a Slovak colleague — a nuclear engineer working at the IAEA — told me about a unique nuclear-weapon museum in Czechia, I felt that this might be of relevance to WiN and to the IAEA. A visit to the museum could help us gain insight into the Soviet origin of Russia’s nuclear-weapon programme — a historical perspective. After all, the use of the atomic bomb by the United States to end the war in the Pacific had led to the nuclear arms race. It also led to Eisenhower’s Atoms for Peace speech, providing the context in which the IAEA was born.

My colleague introduced me to one of the founders of the museum and now a director, Václav Vítovec, a former fellow student of his. I became intrigued: the museum — Atom Muzeum Javor 51 – AMI 51 — was, in fact, a secret bunker. It had been a Soviet facility for storing nuclear warheads during the Cold War and had recently been restored to its original state to be preserved for posterity.

You may wonder what the old bunker, nestling in its idyllic camouflage in rural Bohemia, would have to do with the IAEA or with WiN. At first glance, the Atom Muzeum might be seen as more relevant to a disarmament movement than to the IAEA with its mission of promoting peaceful uses of nuclear energy. Nevertheless, the WiN IAEA Executive Committee were keen to visit this slice of nuclear military history so, on their behalf, I attended the museum’s inauguration in August 2013 — along with Czech Government dignitaries, the press, an international array of Cold War historians, and hundreds of members of the public. Václav Vítovec — also a director of the Iron Curtain Foundation, which maintains the bunker in its original form — gave me a VIP tour and, on the spot, we agreed on a WiN IAEA visit in November.

The WiN Executive Committee decided to combine the visit to the Atom Muzeum with our annual retreat. WiN’s retreats are always special events — very different from our regular activities but indispensable to their smooth organization and to our members’ good collaboration and cohesion. WiN’s activities include arranging scientific presentations and visits, holding networking events, mentoring female staff, organizing the International Schools’ Science Fair, participating in Daughters’ Day at the IAEA, and inviting successful women from diverse professions to speak at lunchtime lectures. Also, we engage in advocacy work, such as promoting gender parity in nuclear professions, awareness-raising for humanitarian NGOs (e.g. Médecins sans Frontières, Frauen ohne Grenzen), and fighting harassment in the workplace. We hold most of our activities in Vienna, usually at the IAEA or at relevant venues in and around the city.

To assess WiN’s past activities and to plan new ones, we supplement committee meetings — which tend to be rushed — with the annual retreat, which is open to all WiN members. There, we combine relaxation and social interaction with extended programming discussions, unstressed and without time pressure.  We like to hold the retreat at a rural spa within easy driving distance from Vienna. Since the Atom Muzeum was only about six hours’ drive away, we decided to plan our November 2013 retreat around a visit to the bunker and — with the help of the museum staff — we found a spa nearby where we could stay. So this became a retreat with a difference!

Three months after I’d attended the museum’s inauguration, there we were! Needless to say, the highlight of the retreat was the visit to the bunker. This underground nuclear-weapon storage facility was fully under Soviet control from 1968 until 1990. It then passed to the Czech Ministry of Defence and was recently taken over by the Iron Curtain Foundation, which has restored it and will continue to maintain it as a museum. Of the 12 identical twin bunkers (i.e. 24 storage facilities) in the former East block, only this one remains. What also makes it unique is that no other nuclear-weapon storehouse worldwide has become a museum.

The original robust Soviet construction and equipment have been meticulously preserved. We chilled in the halls kept year-round at 6ºC and 90% humidity, gaped at the 6.5 ton security doors and mammoth cranes, marvelled at the still-functional, simple, ingenious contraptions in the technical rooms, and were fascinated by the detailed exhibitions in the four side-halls, which had each housed 20 nuclear warheads — weapons that could have destroyed Europe and beyond. The exhibitions had different themes: the Cold War, the Soviet military programme, the United States military programme, and peaceful uses of nuclear power.

Where did it all start? In 1939, Albert Einstein warned President Roosevelt that German chemists in Berlin had split the atom and were working for the Nazis on harnessing nuclear power to create a weapon of mass destruction. Such a nuclear weapon would be able to destroy all life wherever it struck — whole cities and their inhabitants could be annihilated. Einstein urged the United States to start stockpiling uranium. In December 1941, the Japanese bombed the US Pacific fleet at Pearl Harbour, which triggered the USA’s entering the Second World War. In August 1942, the top secret Manhatten Project — directed by theoretical physicist Robert Oppenheimer in cooperation with other leading scientists — was born at the Los Alamos National Laboratory to develop the US atomic bomb. Einstein — regarded by US military intelligence as suspect since he was German and leftist — was denied security clearance to work on the project.

The world witnessed the ‘success’ of the Manhatten Project on 6 and 9 August 1945 when the two large atomic bombs it produced destroyed the cities of Hiroshima and Nagasaki, killing up to 226,000 people, mostly civilians. Emperor Hirohito announced Japan’s surrender a few days later, formally signing on 2 September, which ended the Second World War in the Pacific.

Shortly after the atomic bombs were exploded, Einstein made this statement:

The time has come now, when man must give up war. It is no longer rational to solve international problems by resorting to war. Now that an atomic bomb, such as the bombs exploded at Hiroshima and Nagasaki, can destroy a city, kill all the people in a city … we can see that we must now make use of man’s powers of reason, in order to settle disputes between nations.

What have we learned since then? The arms race between the super-powers has subsided —enough nuclear weapons exist to destroy the world many times over. Fortunately — though nuclear weapon tests continue in some places — since 1945, no atomic bombs have been dropped on populated areas . . .  yet. The threat remains, however, as does the existential question: how to ensure that nuclear power is used to help humanity rather than destroy it?

This question is ever present as one wanders through the halls of the Atom Muzeum.  The museum owes its existence to the vision, dedication, and tenacity of the three directors of the Iron Curtain Foundation, who invested their time and resources in its creation. It is well worth a visit, which can best be arranged by emailing director Václav Vítovec at vitovec@volny.cz. We invited Mr. Vítovec to make a presentation at a WiN luncheon in Vienna in 2014. This led to WiN holding an exhibition — in collaboration with the Czech Embassy — at the Vienna International Centre, where the IAEA has its headquarters. Thousands of visitors were able to view the bunker and the exhibits of the Atom Muzeum that it contained — this unique vestige of nuclear military history — as both a sobering Cold War memorial and a warning for the future. In short, a colossal monument to non-proliferation!